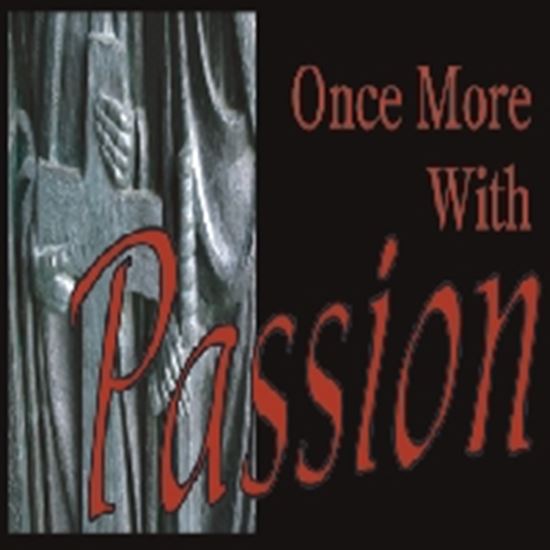 Rick Hampton, an actor, gets a part as a Roman soldier in his hometown’s professionally produced Passion Play. As Rick works hard to learn his lines, he’s also trying to navigate his personal life which is in turmoil. Recently separated, he’s temporarily staying with his mother, who exemplifies so many Christian virtues, including also giving temporary shelter to Karen, Rick’s estranged wife. When Rick is asked to take on the role of Jesus, which includes a dramatic, stylized crucifixion scene, questions begin to arise for him and he’s forced to take a good look at his character—and his Character—and runs smack into grace. Although this drama (with many humorous lines) makes a wonderful Easter play, it can be done anytime. First Place Winner in the scripts/screenplays category of the national Canadian Christian Writers competition for 2010.  Performance Time: About 90 minutes. (Some scenes have no dialogue but music and stage action propel the story.)

“ONCE MORE WITH PASSION”

A: Largely, the music. Picture this: It’s the day after Christmas 2007 and I, a weary church Arts Director, am lying on the sofa fighting a cold, recovering from the Christmas season, and already wondering what we could do for Easter. My husband had given me a 4-CD collection of Selah songs for Christmas (a last-minute purchase when the gift he originally planned didn’t arrive on time). As I let myself get swept away by the beautiful songs, God kept giving me pictures of scenes that could be acted out on stage, moving the story forward without dialogue, like a movie soundtrack. I went to the computer and through the haze of a head cold, completed the first draft by New Year’s Day. It confirmed for me the scripture which says “His strength is made perfect in our weakness.” Later I pulled together 6 or 7 drama team members for an evening read-through and got some great suggestions for the final draft.

Q: WHAT'S YOUR FAVORITE PART OR LINE IN THE PLAY?

A: The funniest part was always Nancy’s questions about how to deliver the line “shut up,” only to have it repeated by Ben in the next scene. The most poignant line for me, though, was when Rick asks Nancy what Jesus would do in his place and Nancy says maybe the better question is what is He already doing, right now? And if you’re seriously looking for the answer, He will show you. WHY? This is how I want to live my life—to see what God is already doing and get involved with that. I think the most spine-tingling moment of the play is the very last one, when Rick and Grace arrive and you realize who Grace is.

A: No, but we certainly had audience members tell us they could relate to the various characters.

A: I wanted to connect Easter’s story of grace with real life. Knowing how hard it is to find an Easter play that somehow combines the biblical story with a modern day setting, I thought the play-within-a-play could work, and it did. I’ve never met an actor who wasn’t somehow changed when called upon to play the role of Jesus, or even to do a voiceover as the voice of God. It seemed like that in itself was worthy of a story.

A: I can’t stress enough how the music worked to make the play a success. We felt it throughout the rehearsal process and had it confirmed by so many audience members.