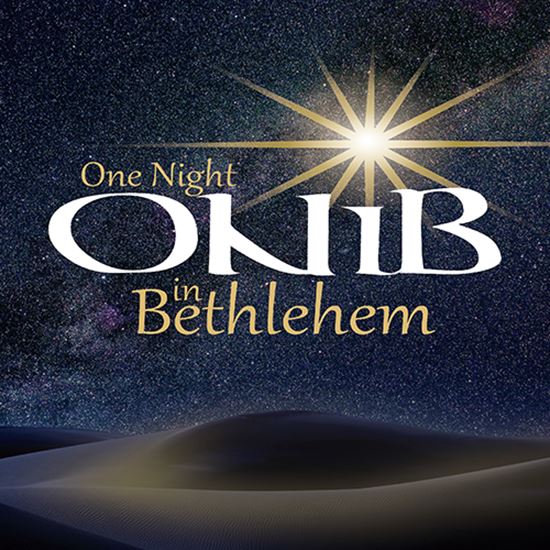 3-12 minor characters and extras (captain of the guard, shepherds, Wise Men, priests, courtiers, and crowds) "One night in Bethlehem, and the world was not the same." This is how God's redemptive love story begins and ends in this 13-song musical. This biblically accurate show unpacks the events up to and including the birth of Jesus as told in the Gospels of Matthew and Luke. God's plan for humanity's salvation begins with unexpected people the world wouldn't choose, but who are called to these eternally remembered roles. The approachable angel Gabriel (Gabe) brings God's messages to Zechariah, Mary, Joseph, and the Wise Men. He shares the good news that John and Jesus are going to be born and warns of impending danger from the corrupt powers of the world. In the Grammy-considered song, “I’ll Give My All,” Joseph’s emotional connection to the audience is evident as the music ebbs and flows over this question that every human seems to ask when God gives us something to do: "Why me?" The Shepherds' song, “Glory Was the Word,” joyously rocks out with unbridled emotion that these guys must have felt when they got the news first. The Devil’s character (Lucifer) tries to make sure things don’t go according to the Lord’s plan, but the Devil fails, and God is victorious, as represented by the finale number “One Night in Bethlehem.” The well-known (and not-so-well-known) characters sing songs that will enlighten you, lift you up, make you laugh, and perhaps even cry. The musical ends with a challenge for all of us, which is to carry the story forward. Approximate running time: 90 minutes, about 50 minutes of music and 40 minutes of dialog.

TALKS ABOUT HIS MUSICAL

ONE NIGHT IN BETHLEHEM

Q: WHAT INSPIRED YOU TO WRITE THIS MUSICAL?

A: There's only one real answer to what inspired me to write this play and that would be the good Lord above. I'll relate below the chronology of how it all went down, but ultimately God choose me as the unlikely vessel to tell this story of a bunch of equally unlikely people and the unheralded baby would redefine life on earth and turn into the only true source of peace on earth. As to why me and how to respond to that call, I'll only echo the words out of Joseph's song, "I'll Give My All."

I never intended to write a musical, but it happened anyway! One Night in Bethlehem started out as a single 'story song' told by the Innkeeper, then Mary's song, "Yes to Love" was written. The next year when my eldest child was in high school she was in a class where they were supposed to write a theater scene. She liked Mary's song and we kicked around ideas for an entire CD based on every character in the Christmas story. She loves to write and next thing this idea of a full blown musical was hatched. There would be this cool harp (harmonica) playing angel Gabriel, known as Gabe, who would be narrator. Every story it seems needs an antagonist and the Bible makes it quite clear that evil certainly has a name, in this case Lu(cifer). This was all super exciting and we stood ready to charge forth.

But then life and the accompanying procrastination happened. In the next three years a few of the songs got written, some historical research happened, but the play was lying fallow until such time as a job change put me on a train for 40 minutes twice a day. So all the songs got lyrics written and some of the melodies composed AND all the dialog got written for the play. It seemed the first thing was to just get the music finalized and recorded. Well then there were about five years of various dead ends in finding musical collaborators, other projects and priorities, and slowly working into my eventual collaborator/arranger Scott Liebenow's busy schedule. Nothing ever seemed good enough in the rough demos, nothing seemed done, and I certainly would beat myself up over not being able to finish this great task I was handed.

And that feeling finally ended when I realized that I was doing everything too small. Yes, God's vision was far bigger than mine. It was time to go for the absolute best with this story that connected with the universal. Within a month I was at Trinity Broadcast Network's (TBN) TMC Studios making an amazing soundtrack album, got on board with Eldridge within the next few months, and here we are now. Awesome!

A: Any song or scene that brings you to tears would have to go down as a favorite. And I have one of each.

Scene 4 ends with Joseph’s song, “I’ll Give My All.” There's a universal emotional connection in this song, in that way only music can. It ebbs and flows over this question that every human seems to ask when God gives us something to do - "Why me?" It crescendos into the song title. Everyone in the studio was in tears as this song seems to capture our frail human understanding but also the resolve that tells our Creator he will indeed get our best. I may never write another song this good is what I told the studio engineer in Nashville. And that's true.

Scene 9 for me is the emotional climax of the play and has a couple spots that just take me down. It begins with Gabe waking up Joseph to tell him that Herod is out to kill Jesus. Joseph reacts with anger at Herod's evilness. Gabe reassures Joseph that Herod's days are numbered. But then Gabe does something we might not think of angels as doing. We do know that Jesus had a moment of doubt in the Garden and he at times wept. So tearfully, Gabe lets Joseph know that both he and Mary are doing great and all of heaven is with them. Always. And that he (Gabe) doesn't fully understand God's plan in all of this, but that he knows that God's plan are ultimately perfect. It's in this moment that I so love these people that I find myself saying I would die for them if that's what it took. The script says that Gabe gets choked up. I was the one reading Gabe's part in the first script read-through, and the choked up part was certainly real. OK, so the playwright is invested in his play.......

But then the scene goes on to another emotional dagger for me. Joseph has to wake up Mary and tell her that the ruler of their country wants to kill her child. Mary goes from drowsy to instantly expressing the absolute love and protectiveness that every mother must have felt. "They'll never get my boy!" Joseph replies, "No power on earth can stand against a mother's love..." Everything that a mom ever did/does in her unbounded love connects with me in this scene. Any and every mother (and father too for that matter) who has looked at their precious baby and knew they would sacrifice everything up to and including their own life can connect with this. Even though I wrote it, every time this scene just get me teary.

And while I'm at it, I should say I do love the shepherd's song, "Glory Was the Word" cause it completely and joyously rocks out with killer riffs, great vocals, and the unbridled emotion that these guys must have felt when they got the news first. Oh, yeah!

Q: WHAT WAS THE MOST DIFFICULT PART IN CREATING THIS MUSICAL?

A: What was difficult for me wasn't so much the writing part of it - that came almost easily in a truly inspired way. SO much so that I should probably just list the Creator as co-writer - smile. What was difficult was having the years go by and feeling like I wasn't getting done what I needed. Ultimately, I took some degree of solace in Moses - he ended up on a 40 year mission and he only got to glimpse the completion of it. But then God seemed to green light it all and this amazing burst of activity brought me to this moment. But looking back, the journey and struggle was necessary and maybe, just maybe, I learned a bit about His timing, not mine. What's that called - patience?

Q: WHAT DID YOU TRY TO ACHIEVE WITH THIS MUSICAL?

A: I just want to turn people to Jesus. "Hope" has always been a big word for me. Jesus is our only real hope for getting through this messy world and then, what an eternal payoff awaits. I want to pass this hope on. And maybe the best way to do that is to start with a story most all know to some extent, make it about real people in real, yet extraordinary circumstances, and tell it in a way they haven't heard before. My hope is that is “One Night in Bethlehem” can be a key that starts to unlock hearts onto this path of salvation.

There are three main themes in the play. First theme is that God's things happen in God's time - not ours. A second theme in “One Night in Bethlehem” is the unlikely choices (by human standards) God makes for the 'starring' roles in his story. This writer certainly falls in that category and is eternally grateful to have been chosen. This story of a savior baby is told in a way that is ultimately inclusive enough for those of any faith or even no faith to hear and perhaps start a journey towards Jesus. A final theme is bringing out the humanity of these well-known names. Like Mary and Joseph were a real couple whose marriage began with moving to another country because the ruler of their country wanted to kill their child. It's linking their humanity to yours so that you too realize you're part of the story.