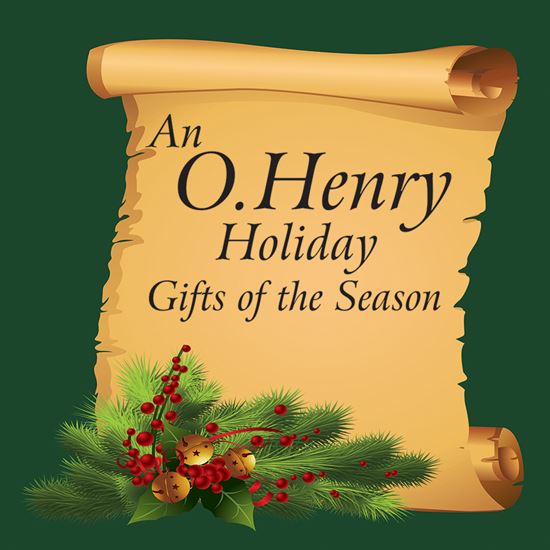 “The Gift of the Magi” is probably one of the most beloved stories for Christmas. It, along with two other tender stories by O. Henry, “The Last Leaf” and the lesser known “Christmas by Injunction,” are dramatized here, set in the framework of O. Henry’s life which in itself is a story. In the early 1900s he was one of the most widely read authors in America. O. Henry, whose real name was William Sydney Porter, was known, however, to have spent some time in jail for allegedly embezzling from an employer, and it is believed that he started writing there in order to support his daughter. Based on these events, the play opens with him jailed on Christmas Eve. Each story he tells -- the first to his jailer, the second to his daughter, and the third as he is writing it -- comes alive with the actors taking over their character’s lines. As he literally breathes life into them, they maintain the wit, charm and sweetness with which they were written. (Production photos courtesy of Brian Stetham.)  About 90 minutes.

“An O. Henry Holiday – Gifts of the Season”

WHAT INSPIRED YOU TO WRITE THIS ADAPTATION?

As both a professional stage actor and a director, I had had my fill of A Christmas Carol (though Dickens is one of my favorite authors). I had directed a number of Christmas shows and wanted something different. I had seen a film production of The Last Leaf with the late Art Carney and fell in love with the story all over again. I read another play based on several O. Henry stories, but found that once his own words were tampered with, they lost their charm. So I decided instead to write a framing piece with the colorful character of O. Henry (nee William Sydney Porter), based loosely on his actual life, and keep his words intact, bringing them to life with the actual characters. I knew I wanted to include The Gift of the Magi, and then when I learned of the Christmas by Injunction, the trio was complete.

WHAT’S YOUR FAVORITE PART OR LINE IN THE PLAY? WHY?

After I knew I wanted to incorporate The Last Leaf, I was trying to envision exactly how that would work on stage, with a tree that kept losing leaves. Rather than see the actual tree, I let the audience’s “vision” of it come from the characters’ and O. Henry’s descriptions. The only time we actually saw what the girls were seeing was at the very end. I had taken a picture of an autumn ivy leaf and transferred it to a slide. As the lights came down on the scene, the last thing the audience saw was the single leaf, projected against a brick wall. Even after all the other lights were black, the leaf remained a moment longer before a complete blackout. It was one of those moments when the entire audience sat in rapt silence.

WHAT WAS THE MOST DIFFICULT PART IN CREATING THIS ADAPTATION?

The most difficult part, as I imagine it is for most adaptations from books, was to find ways to make it work on a stage in a way that was both practical and still retained all the charm of the stories. The above description of dealing with the tree shedding its leaves was a prime example. In Christmas by Injunction and The Gift of the Magi where there were several locations, these were achieved with just adding and removing set pieces, utilizing folding screens, sound effects and a scrim. We also used the apron as well as the area on the floor between the stage and the audience.

WHAT DID YOU TRY TO ACHIEVE THROUGH THIS ADAPTATION?

In addition to wanting to offer something different for the Christmas season, I also wanted to introduce younger audiences to the wonderful stories of O. Henry, and also expose everyone to a bit of the writer’s interesting background. For example, it is theorized that he took his pen name either from a pharmacist with whom he worked or a warder at the prison where he was incarcerated. It is also thought that he began writing the stories in jail to support his daughter. Finally, the main thrust of these stories is the gift of unselfish love, a theme often lost during the holiday season.

DO YOU HAVE ANYTHING ELSE YOU’D LIKE TO ADD?

While I would always encourage all actors to give their character a full life, even the more minor ones, there is great opportunity for that to happen in these pieces. For example, in Christmas by Injunction, there are two dance hall girls. Upon their first entrance, as they were being described, I had them tap dance (buffalo) in. From then on, each time we saw them, they were either dancing, or juggling, or performing in some way, even if it was just a swirl of a cape or an extended bow. They ended up having very distinct personalities as well, one perfectionist, the other a bit clumsy, and both utterly charming.