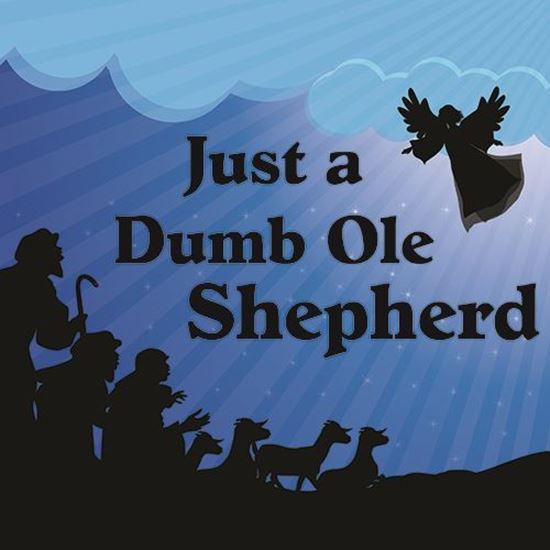 Owen is disgruntled. It’s time for the annual Christmas pageant and he’s been chosen for the role of a “dumb ole shepherd.” It’s even worse because his older brother will be playing a king carrying a gift of gold and his sister an angel dressed in regal finery. Meanwhile, Owen will be clothed in a “ratty old bathrobe with a towel wrapped around his head” carrying a stick. It just ain’t fair!

While he is stewing over his fate, he drifts off to sleep where he is transported back to the hills of Bethlehem. There he meets the shepherds, Simon, Jacob and Esau, where he learns just what it took to be a “good” shepherd. He even gets to witness the angels announcing the birth of the Messiah and make the trip down to the manger to see the child for himself.

Upon waking, Owen is reminded that the little baby in the manger was in fact a shepherd himself. The “Good Shepherd” that was willing to give His life for His sheep.

As a director over the past years I noticed that the boys would always vie for the role of the king over that of the shepherd.  I mean, who wouldn’t prefer to wearing a crown to a towel on their head.   Using the passage and description of the “Good Shepherd” in John 10, I wanted to portray a more accurate picture of a lowly shepherd and the lengths he would go to protect his flock.

My favorite line is Simon’s answer to Owen when he questioned whether or not it was safe to leave the sheep unattended while they went to search for the Christ child.   Simon said, “I think the flock will be all right.  God has declared a message of ‘Peace and Good Will.’  So, I think that on this night of all nights, all will be well.” The Bible states that all creation has been groaning since the fall of man. (Romans 8)  Isn’t it a lovely thought that with the birth of the Christ Child, all creation became aware of what was happening and there was at peace on earth for that one night?

The characters are just ordinary people and the brother is just a typical brother where the eldest always makes it harder on the younger.

I just wanted to point out that the lowly shepherd guarding his flock on the lonely hillside was actually more important than a king riding across the desert on a camel getting saddle sores.

Just remember to glorify the real “Good Shepherd” who was willing to give His life for His sheep, our Lord and Savior, Jesus Christ.