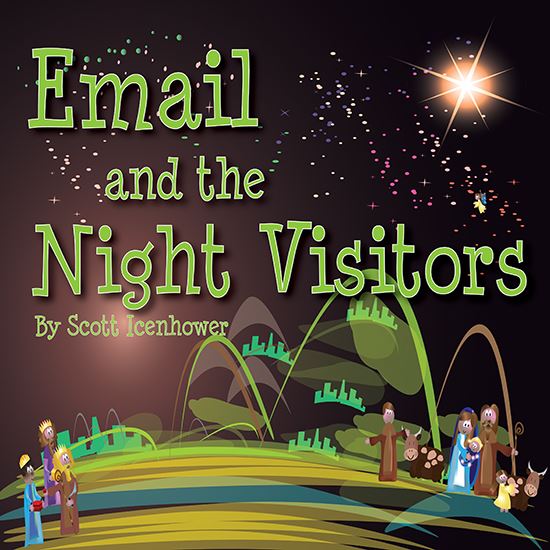 Kaylee is not particularly thrilled about having to be part of a living Nativity at her church. Instead of standing outside in the cold, posing with her friends in costumes like a cheap religious Christmas card, she'd rather be with her boyfriend. The others have varying opinions, but all agree that emailing, texting and playing on their cell phones help pass the time between running to positions whenever a car passes. Kaylee just thinks it's all a waste of precious time. But sometimes God chooses crazy things, like this living Nativity, to share His love. So on a night like this, He might let a group of over-costumed kids minister to a lonely mother with a sick child. He might even let a zebra escape from the zoo. As the night gets a little more frantic, it also becomes a little more holy, and in the end, hearts are changed and lives are healed. Running time: around 30 minutes.

EMAIL AND THE NIGHT VISITORS

A: This was originally a short play I wrote for a drama class. The idea was drawn from my time doing Living Nativities in my youth. When I thought about expanding this play, I recalled a lesson I learned in my early days about not discounting people or situations because the Lord can use anyone or anything to accomplish His will.

Q: WHAT'S YOUR FAVORITE PART OR LINE IN THE PLAY?

A: When Kaylee's mom says, "You'd be surprised. Sometimes the craziest things are what the Lord chooses to use." That is the premise of the play and a life lesson for me.

A: All the characters and situations are fictional.

A: I wanted to remind people that some coincidences and crazy situations are from God. Use them.

A: This show is a playful variation of the 1951 Christmas opera "Amahl and the Night Visitors." In the opera, the Three Wise Men visit Amahl on their way to see Jesus. Through their interactions together Amahl's mother shows a change of heart; and through Amahl's action of giving a gift for Jesus he is healed physically.

In my play Mrs. Martin has an implied change of attitude toward God resulting from the action of the girls. And a hopeful audience could imagine her son Alex being healed of leukemia. Kaylee also has a change of heart and a true understanding of how God can use simple and seemingly crazy things to accomplish His will. The night visitors are Mrs. Martin and a zebra and the emails represent the iphone communications among the girls. Not an exact parallel with the opera, but I though the variation on the opera's name was rather intriguing on its own and for those who are familiar with the opera, the altered title might cause them look further into the play.