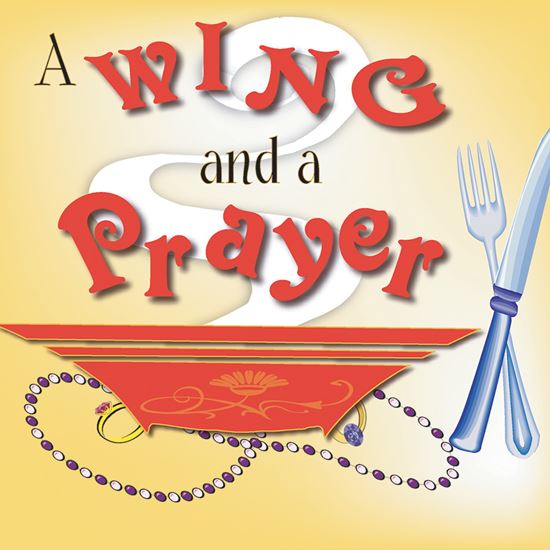 A Wing and a Prayer

Rev. Longacre is gathering a small group of church members together at a potluck supper to broach the subject of starting a building fund. Duty-bound Hazel arrives first to set up everything and tell the Reverend she hasn't yet found out who's been sending him anonymous love letters. Several others arrive including Annie, the church secretary who is hiding something under her coat, and Lillian, the richest woman in town who seldom attends Sunday services. Before Rev. Longacre is able to give his two-hundred-plus reasons for the drive, Lillian startles everyone by announcing she is giving the church $1.5 million in jewelry so there won't even need to be a fund drive. All are stunned. But when Lillian's purse is retrieved from the cloakroom, it is empty of jewels. Well-versed from reading so many mystery novels, Rev. Longacre begins an investigation that leads his church members - and your audience! - to reveal the culprit. A complete description of clues for the audience to find is included at the end of the script. This comedy is ideal for your own dinner theatre.

TALKS ABOUT "A WING AND A PRAYER"

Q.: WHAT INSPIRED YOU TO WRITE THIS PLAY?

A.: I have to admit, this idea didn't originate with me. Nancy, one of the editors at Eldridge, asked if I'd write an audience-participation play which could be used for both their religious and general markets. I don't know which of us came up with the covered-dish dinner for the setting, but what would be more appropriate? And with such a setting, since the audience is treated as guests at the event, they're instantly involved.

Q.:WHAT IS YOUR FAVORITE PART OR LINE IN THE PLAY?

A.: My favorite part of the play is near the end when Lillian's boyfriend is revealed and almost made a scapegoat. Even though the audience member ed won't have to say a thing, if the right man is chose, this will be a really funny moment.

Q.: WHERE DO THE CHARACTERS COME FROM? ARE THEY BASED ON PEOPLE YOU KNOW?

A.: Usually my characters are not based on people I know because people we know are so complex, and in a fairly large-cast, fast-moving play, I can't build too many layers on a character. However, I do know people like Rev. Longacre, and what group doesn't have a busybody like Hazel?

Q.: ANYTHING ELSE YOU'D LIKE TO SAY ABOUT IT?

A.: I hope cast and audience members have a lot of fun with this play. I wanted to create something funny and very easy to produce.