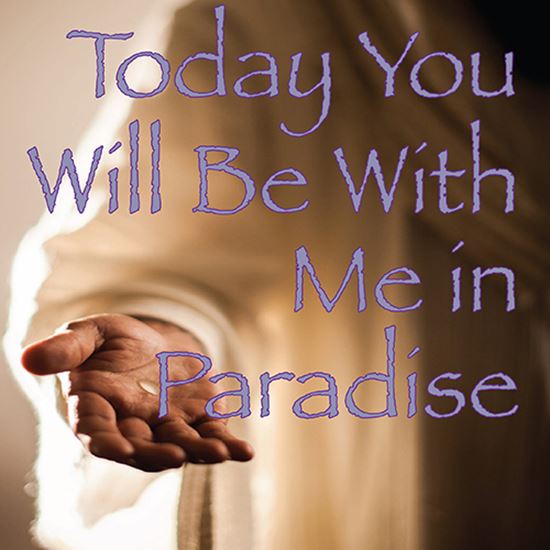 Joshua is a young man struggling with his father’s abandonment. When he begins to run with the wrong crowd and tries to rob a liquor store, he is caught and charged. Blaming God, unable to accept his mother’s love or Pastor Brian’s guidance, he sits in his jail cell. How will he find forgiveness? As Joshua struggles, we see Jesus work to accept his upcoming crucifixion. Beginning with his baptism to his resurrection, Jesus is seen and heard by his followers. His disciples attempt to understand how to help Jesus as He approaches death. Intermixing the resurrection with a modern day story of faith and forgiveness, this play reminds us that Jesus will come for each of us who reaches out to Him. About two hours.

TODAY YOU WILL BE WITH ME IN PARADISE

My inspiration to write my plays always comes from God. In this play, the forgiveness of the thief that hung next to Jesus on the cross and the young man, Joshua, inspired for me a story of unconditional love and forgiveness. I want for people to see the true sacrifice that was made on that cross for all of us. My passion is to tell His story, His way.

What's your favorite part or line in the play? Why?

I have several parts in this play that speak to me, and when I have to stand in for an actor and actually say the words out loud, they make me cry. They are heart wrenching and in many cases reveal the feelings of those who followed Jesus. I would like to mention all of them but they are too numerous to list here. There is a scene with Pastor Brian and Joshua in a holding cell that does ring true with me and I would like to share that. He says, "He died on that cross, Joshua, for us. He looked down from it and He saw all of us and said, 'I die for all my children.' He didn't say I will only die for those who believe in me or do everything I tell them to do. He promised to forgive all our sins. That is good enough for me. I choose not to crucify Him again by not believing in him or putting Him on trial and making Him prove himself. He did that already."

The characters in the play evolved. I put myself in each storyline and try to imagine those who were part of each story. I tried to imagine the feelings of each one. The characters all become very real to me. By the end of the play, I feel what it must have been like to be with Jesus and know He would have to die on that cross or what it was like when He walked into the upper room after the resurrection. I became a part of Joshua's life and felt his turmoil as he questioned where Jesus was when his dad walked out and left him. I write passion into my characters so that others will feel and they will understand that, indeed, this is a fragile world in which we live, but God has a Kingdom far greater than anything we would ever know here, a Kingdom built on His word.

I wanted the audience to see Jesus with new eyes. I want them to see Him truly human and truly divine. I want them to know He died on that cross for all humanity and took the sins of the world with Him. If we are His Disciples, His followers, we must become Easter people in every sense. "For through our Father in Heaven, the light has come into the darkness for the world to see."