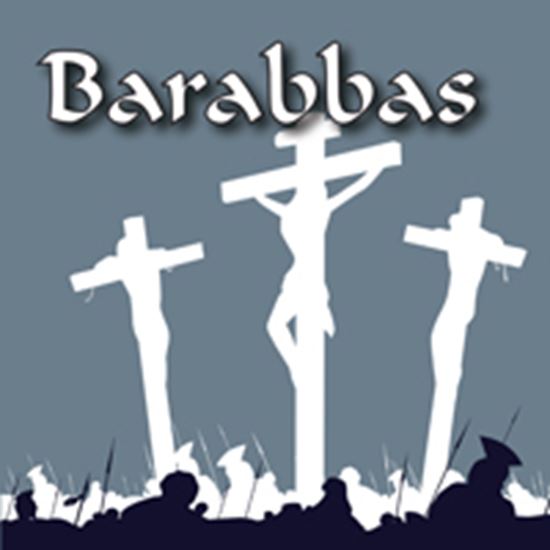 A thief and rebel, Barabbas dreams of leading a free Judea. He is captured and sentenced to die, but on the eve of his execution, he is reprieved and a rabbi, Jesus, dies instead. Barabbas is pleased about this until rumors start that the dead rabbi has risen and is now very much alive. Jealous and resentful, Barabbas plots to expose the resurrection as a fraud, thus regaining his own position as leader, but his plot goes awry when he himself comes face to face with the living, breathing Jesus. Few Easter plays are written from Barabbas’ point of view, much less with such richly nuanced characters. From the opening, bracing violence to Barabbas’ final line, “Because he died for me,” this play is utterly absorbing, compelling and ultimately uplifting.   Full evening.

I’ve always been fascinated by Barabbas, the only man who can physically say Jesus died in his place. What did he make of it all? Did he go back to his old ways, or did his encounter with Jesus change him permanently? I wanted to explore that aspect of the story.

Thirdly, I have always loved stories of redemption and hope. It’s a source of wonder to me that, no matter how bad we are, we can be forgiven and redeemed by Him, and I love to show that.

Q: DO YOU HAVE A FAVORITE PART IN THE PLAY? WHY?

A: I think my favorite part is when Barabbas is about to cut the soldier's throat to prove he is no collaborator, and Jesus steps forward, stunning him into changing his mind. It sums up how I felt the moment I realized Jesus is real. He changes everything. And in this case, it's double fold, since He not only saves Barabbas from his actions, but He saves the doomed soldier as well.

Q: WHERE DID THE CHARACTERS COME FROM? ARE THEY BASED ON PEOPLE I KNOW?

A: I honestly don’t know where my characters come from. I get the story idea and the characters come forward, almost as if they are auditioning for the roles. Often I start with a number of characters and they get reduced and weeded out, and some get through and some do not. Any that don’t fulfill a need in the story are sent on their ways. The ones that do make it through are people I get to know well over the thinking, planning and first draft period. They’re very real and I can tell you what they would and wouldn’t do or say, the same as any close friend.

Sometimes, when I have a problem and I’m not sure how they would behave, I go for a long walk with my dog and listen, and they tell me. I know their past, their views, their opinions on a variety of things. Funny though, I rarely know what they actually look like. I might know basic things like age and size, but not specifics, which is a good thing for casting roles.

I hesitate to say they are based on people I know, though there must be elements of that. Sometimes, it’s more their actions and reactions are based on the behavior of people I know or have observed, rather than a person in total.

A: I wanted to show that nobody is beyond the redeeming love of Christ, no matter what they’ve done. I also wanted to look at how the events must have seemed to those who were there at the time, people who didn’t know what was coming or what to expect. I hoped to make the story real and relevant to modern audiences. The story can become so familiar we don’t even see it any more. Coming from a different angle, I hope people will see it in a fresh light.