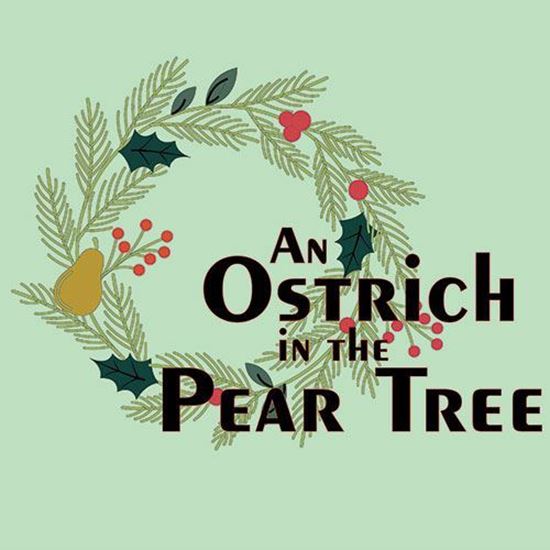 An Ostrich in the Pear Tree

The lives and struggles of several individuals come together in this light-hearted story when popular radio psychologist, Dr. Terri, decides to hide out at the Pear Tree Inn. Facing burnout and questioning the value of her career, she longs to be a normal person again. At the inn she meets Beverly, a retired school teacher who feels unappreciated and useless and who spends her days reading the newspaper and listening to her favorite talk show host — Dr. Terri. Beverly's daughter Lisa and husband David, owners of the inn, have problems of their own since competition has opened in the downtown historic district. Younger daughter, Kelly, is ready to move closer to campus for her final semester of college but has no money to make it happen. Although unrecognized, Dr. Terri can't control the urge to offer suggestions and fix everyone's problems. But the best advice comes from Tony, the electrician-philosopher, who reminds Dr. Terri where to turn for direction and the importance of being who the Lord made her to be. During a last-minute live Nativity, Dr. Terri remembers that life's true meaning comes from God's gift, His Son, who has promised that if we acknowledge Him in all our ways, He will direct our paths. Approximately 45 minutes.

A: Three ideas came together for this play. First, I had been thinking about those living in retirement homes or nursing facilities, possibly feeling worthless and insignificant when in reality they've been an encouragement to many people over their lifetime. Only after they pass away do people come forward to express their gratitude. What if someone printed his or her own obituary to see what the response would be? I created the character of Beverly to do just that.

Years ago I occasionally listened to radio psychologists taking calls and offering quick advice. I considered what it might look like if they were unable to turn off their advice-giving habit. Enter Dr. Terri.

And last, one day I was singing, "The Twelve Days of Christmas," and noticed the word partridge sounded a lot like ostrich. I sang my new version a few times, wondering how I might put an ostrich in a pear tree. I had found my setting.

I dropped Beverly, Dr. Terri, and several other characters into the Pear Tree Inn, added an ostrich just for fun, and told the story.

A: There are many sections of comedy that I enjoy. The interaction between David and Mr. Perkins is especially funny. When an audience laughs in all the right places—and a few unexpected ones—they confirm the comedy is working.

One of my favorite parts of the play comes when Beverly is reassuring Dr. Terri that she truly does help people through her radio program. She reminds Dr. Terri of her response to callers who feel no one needs them. "People don't often tell us what we mean to them unless there's some reason, but we touch people in ways we aren't even aware of, and they touch someone else and it goes on and on." Whether it's the influence of a parent that we pass down to our children or someone living out their faith during a trial that gives us courage to go on or something as simple as a smile to someone who's having a bad day, we each influence others. No one is insignificant. Sometimes I think we need to be reminded of that truth.

Q: TELL US MORE ABOUT THE CHARACTERS.

A: Teresa Bradley (Dr. Terri) is a successful psychologist who has spent her career giving advice to her radio listeners. She's tough, but she is experiencing burnout from always fixing other people's problems. The persona of Dr. Terri has taken over Teresa’s life, and she wants nothing more than to be a normal person again.

Beverly Webber is a retired teacher who thought leaving her job would give her time to explore the world. Instead she has moved into the Pear Tree Inn, owned by her daughter and son-in-law, and spends her days listening to Dr. Terri and reading the local obituaries. She feels useless and unappreciated and wonders if anyone even realizes she's still alive.

Beverly's daughter Lisa and her husband David own the Pear Tree Inn. Their business is in trouble because a new Bed and Breakfast has opened in the downtown historic district. David is a laid-back, go-with-the-flow kind of guy who is willing to try almost anything to save the inn, while Lisa is the organized one who wants to do what's right.

Kelly Webber, Beverly's younger daughter, also lives at the inn and is a senior in college. She wants desperately to experience the freedom of living closer to campus her final semester but sees no way to make it happen. Not only is she not a fan of Dr. Terri, she considers her "cheap, anonymous advice" to be drivel. Kelly never imagines the famous doctor will help solve one of her biggest problems.

Tony cannot be described with a simple job title because, as he insists,

"I'm Tony. Electrician is just what I do." He is, in fact, an architect, has a graduate degree in engineering, and owns his own company. He is an intelligent deep-thinker whose sound advice points Dr. Terri in the right direction.

Mr. Perkins is a slightly eccentric farmer who rents his menagerie of animals for special occasions. He doesn't mind substituting one for another whenever the need arises, which causes a comical situation at the inn.

A: My other plays were serious, so I wanted to write a comedy with a message. I hoped to remind people that, when we get too busy to focus on the reason for Christmas, we begin to drift. If we aren't careful, we end up without direction as did Dr. Terri. God sent His Son Jesus, as a baby in a manger, to give us abundant life. If we acknowledge Him in all our ways, He promises He will direct our paths.

A: I usually write alone, but I enjoyed co-authoring this play with my son Nathan. As a counselor, his input was invaluable in creating the character of Dr. Terri, and his love of philosophy showed up in much of Tony's dialogue. We played off each other to write many of the comedic scenes. Some of our remarks never made it to the page, but we had a lot of fun brainstorming possibilities.

There's nothing quite like creating a play, then watching it come to life through the talents of actors and getting the immediate feedback of an audience's response. To me, no other form of writing is so satisfying.